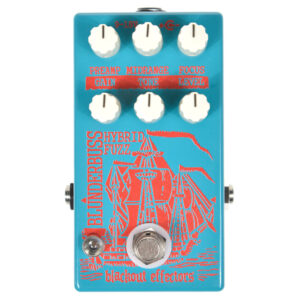 All the ripping fuzziness you’ve suspected couldn’t exist without ritual human sacrifice. The Blunderbuss Hybrid Fuzz is based on the formidable Musket circuit and formerly a limited edition offering; with an updated graphic in the original teal & red colorway.  Sharing the Musket’s DNA, the “Bbuss” utilizes the same layout and control configuration, but with a tonal character all its own. The Blunderbuss uses hybrid silicon/germanium asymmetrical clipping to achieve an even more crunchy and fuzzy assault, but that’s not where the differences end. In all, there are more than a dozen tweaks on the circuit that help differentiate its behavior from the Muskets. The Bbuss is less compressed and more “open” sound in comparison to the smooth, singing compression of the Musket. It’s a less refined sound, more raw and rude, more vintage ripper than the Musket’s quasi-fuzz/distortion sound.

A highly tweakable, highly fuzzed-up iteration of the vintage muff-type circuit. But why stop at 4 gain stages? 5 is clearly 1 better. The Blunderbuss’ added controls over MIDS-shaping, PREamp control, and FOCUSing the sub-low end frequencies address all of the commonly discussed shortcomings of the old 3-knob fuzz. Like it’s cousin the Musket, the Blunderbuss can be found as one half of our dual fuzz monster, the Special Twosome Deluxe.