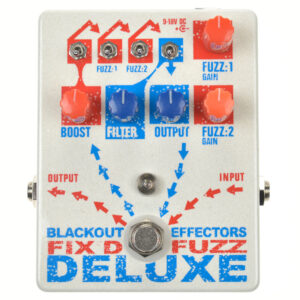 Fix’d Fuzz Deluxe, the hydra of handmade fuzz boxes, boosts & overdrives. Replete with two polar opposite fuzz tones, as well as a full range clean boost through heady overdrive and a wide tone sculpting stage. It delivers big diversity in sound – all in a small footprint package designed specifically for the cramped pedalboard. The Deluxe version is the continuation of Blackout’s first offering way back when: the discontinued Fix’d Fuzz.

For the uninitiated, each toggle activates a different stage of the circuit and their corresponding controls, allowing for a myriad of possible stacked combinations. With the help of the arrows, you can follow your signal all the way from input jack to output jack. The new Deluxe version was made identical to the Twosome version of the circuit (and differs from the discontinued Fix’d Fuzz) by externalizing the controls for FUZZ:1 and FUZZ:2. Version 3.5 of the Fix’d circuit has also seen some minor circuit tweaks for smoother operation. The old Fix’d’s FUZZ:1 and FUZZ:2 gain trim pots have been externalized as full-size pots making real-time tweaks possible and unlocking the hidden sounds and range lurking in both. The Output volume control is completely independent of the four Fix’d stage before it. If the LED is lit, the output knob is active, even if all 4 of the stage toggles are inactive. The creative among you will see the possibilities for using the Output knob alone as a “reverse boost”. The FIX’D FUZZ DELUXE is a 100% pure analog syrup of gnarly transistor-fried fuzz and true bypass switching in a beastly rugged case.